MINDS and GOLD awards at PERINTIS2016

15th November, I carried the robot from Sintok to KL Sentral, then took a cab to RnR hotel, UNITEN. Travelling from 7.30 am, reaching the hotel at about 3.00pm, all the way I carried the BacaBot robot, purposely for the event at PERINTIS. The robot indeed is heavy, but on top of that, it is also fragile! Alhamdulillah, Safinar’s sister gave a hand from KL sentral to UNITEN.

It has been quite a while since I last took part in such a competition. This time UUM brought 2 products. BacaBot (with Dr Jaja, Dr Mustafa & Dr Azizi) and Write-rite (with Safinar). I actually have another product with UTP, Autism Social Aid (with Iman, Dr Wan Fatimah, & Dr Sobri). We were told that the judging process should begin at 9.00. Well, seems like the judges were so eager – I was barged by them at 8.40!! With setting up half done, table ‘berterabor’, I just have to go with it. Alhmdulillah, BacaBot works well. 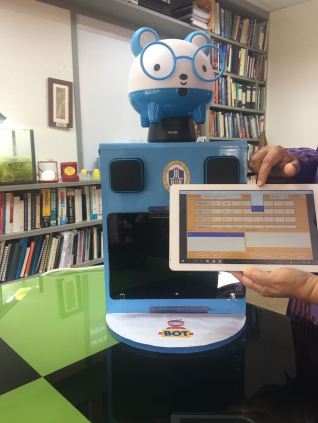 The results were announced during dinner the same day. Guess what? BacaBot grabbed 2 awards – Gold and MINDS special award (MINDS= Malaysian Inventors and Design Society). Write-rite got Silver medal, Autism apps got Gold. We brought 3 products, we grabbed 4 awards. how cool is that?

The achievement has attracted Bernama and Metro. So there we go. in three newspapers! he..he.. 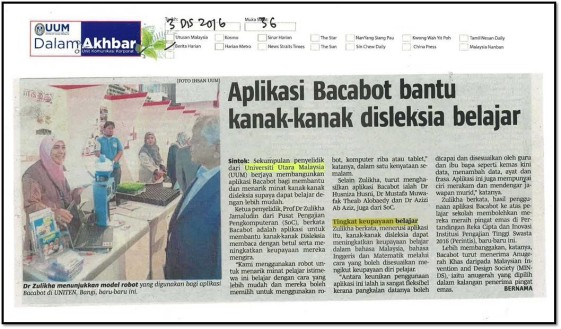 UUM was represented by a team of researchers from the School of Computing (SOC). The team, led by Prof. Dr. Zulikha Jamaludin, included Dr. Husniza Husni, Dr. Mustafa Alobaedy, and Dr. Azizi Aziz.

“The intense competition was quite thrilling since other universities had entered quite a number of products while we had taken along only three products, namely, Bacabot, Write-Rite, and Autism Social Aid. Thankfully, all three products caught the attention of the jury and each one managed to secure an award each,” she said.

It was double the joy for the team when Bacabot received the Special Award from the Malaysian Invention and Design Society (MINDS). This award is only presented to recipients chosen from amongst the gold medallists.

According to her, Bacabot is an application devised to help children (both normal and dyslexic children) to read accurately, enhance their ability to count, and learn Malay, English, and mathematics in a way that can be adapted to the level and needs of their ability.

She explained that one of the elements that had won the jury over was the fact that its efficacy was result proven through a trial which, when carried out on school children, showed encouraging results.

“We use robots to attract the interest of the students to learn in an easier way. They can choose to use the robot, laptop, or tablet (multiplatform).

“What is unique about this application is that it is very flexible. Its database can be accessed and adapted by teachers and parents by way of updating data and adding new data, sentences, and phrases. Apart from this, it has features which will help students to read, listen, and even record their answers,” she elaborated.

She added that the idea came about after a research that was carried out in 2007 to produce a framework to help students. This, she said, later led to the development of several prototypes, namely, BacaMax, ARBaca, Mybaca, and BacaDisleksia, which were continually improved upon from time to time.

The product called Write-rite, developed with Safinar Rahim, succeeded in claiming the bronze medal. The prizes were presented by the Minister of Science, Technology and Innovation, Datuk Seri Panglima Madius Tangau.

The competition, organised by the Malaysian Invention and Design Society (MINDS) in collaboration with the Ministry of Science, Technology and Innovation (MOSTI) and the Ministry of Higher Education, provides the best platform for researchers to showcase their scientific and technological inventions to draw the attention of manufacturers, inventors, and companies.”

can also be found at http://www.uum.edu.my/index.php/en/uum-news/3834-bacabot-clinches-gold-at-perintis-2016

BacaBot is a windows-based apps